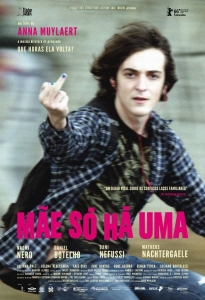 Followed by a reception with live music by Mistura Fina.
*Limited tickets available

The Vancouver Latin American Film Festival is proud to present as the Closing Night Film the North American premiere of Don’t Call Me Son, the latest film by Anna Muylaert.

A rock band, a joint, a mirror, a lipstick, a kiss. All the simple elements that make up a month in the life of Pierre, a teenager who lives in the suburbs of São Paulo with his mother and sister. He is exuberantly discovering life and exploring his sexuality, which includes a liking for wearing lipstick and lingerie. One day Aracy, his mother, is uncharacteristically late for dinner. When she finally arrives, she is accompanied by two police officers. Pierre is informed that they have a deposition declaring that he might not be Aracy’s biological son. Obliged to do a DNA test, Pierre’s world is turned upside down by the uncovering of a secret from the past that will disrupt everything he thought he knew about life.

“…a poignant and energetic Brazilian drama that turns a potentially bleak subject into a warmhearted study of genetics, gender and the true meaning of home.” Jordan Mintzer, The Hollywood Reporter

“Muylaert handles an atmosphere charged with intensely conflicting expectations with a light touch, and sparks of humour.” Wendy Ide, ScreenDaily