Indigenous Film from BC & Beyond: Brazil

These three films celebrate the diversity and plurality of Latin American film culture while highlighting the importance of Indigenous self-representation. The films are part of an innovative project in Brazil, Vídeo nas Aldeias (Video in the Villages), founded in 1986 with the goal of making film production accessible to Indigenous populations. The video collection at VNA is a vital part of Brazil and Latin America’s social, cultural, historical identity and legacy while representing the contemporary situation of over forty Indigenous groups in Brazil. www.videonasaldeias.org.br. 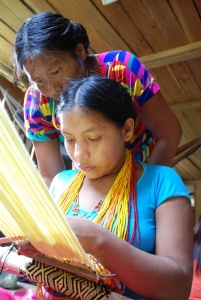 With the goal of reversing the abandonment of the sacred wisdom of his people, Zezinho Yube, with the help of his mother, seeks to preserve the knowledge of the traditional designs of the Huni Kui women. Despite histories of colonization in Brazil, these graphic designs and patterns have persisted through the matrilineal passing down of knowledge through baskets, weaving and body painting. Following his father’s research (the professor and writer, Joaquim Maná), the filmmaker shows the struggle for the continuity of skill and knowledge of the Kene (Huni Kui designs), while contextualizing the contemporary struggle of his people in Brazil through his camera lens. 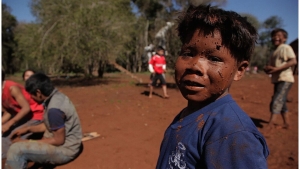 Palermo and Neneco, two Mbya Guarani boys from Rio Grande do Sul, reveal the drama of their people through their play. We follow them through their daily excursions and surroundings, discovering the (shrinking) natural beauty of their territories and the encroaching and devastating presence of the farmers on their lands. The children’s daily adventures and their painfully conscious understanding of the “white man’s” interference in their lands and lives, expose the tensions between the aftershocks of colonization, the continuum of traditional teachings, and the transformation of cultural identities in an ever-shifting present. 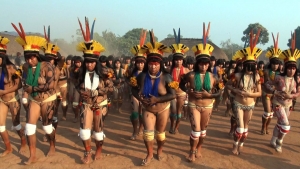 THE HYPERWOMEN
As hiper mulheres
Brazil, 2011
Kuikoro and Portuguese with English subtitles/ 80 min

In the Kuikuro homeland of the Upper Xingu of central Brazil, the community is called upon to make preparations for the Jamurikumalu ritual: a traditional festival of singing and dancing that is performed only by women. However, complications arise when the elderly woman who knows all the songs is found to be seriously ill. With refreshing frankness and exuberance, this extraordinary documentary follows the Kuikuro people in a race against time to preserve the knowledge of their elders and the practice of their traditions before they are lost forever. Winner of the 2012 Al Jazeera Documentary Award at VLAFF.