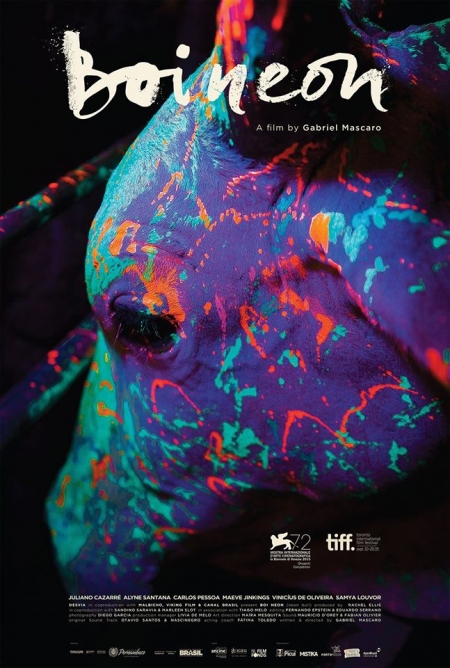 Wild, sensual and utterly transporting, Brazilian writer-director Gabriel Mascaro’s second fiction feature unfolds within the world of the vaquejada, a traditional exhibition sport in which cowboys try to pull bulls to the ground by their tails. Neon Bull explores the vaquejada through the eyes of Iremar (Juliano Cazarre), a handsome cowboy who works the events. While he’s not afraid to get his hands dirty, Iremar’s real dream is to design exotic outfits for dancers.

Few films have explored the particularities of rodeo life… Fewer still have brought to the rodeo the sort of painterly vision that Mascaro and cinematographer Diego Garcia display here, with sweeping widescreen images that not only capture the pastoral beauty of the Brazilian landscape but also embrace their characters with deep affection. We come to love this ragtag band of labourers — even Iremar, who, though ornery and boastful, possesses an artist’s heart and an optimism that’s tougher than leather. (synopsis courtesy of the Toronto International Film Festival)

”In some ways, the astonishing second feature by Gabriel Mascaro, is a movie about animal smells. An intoxicating reflection on the interconnection of taste, scent, instinct and desire, the film, gorgeously photographed by Diego Garcia, immerses you in the intensely pungent world of vaquejada.” Stephen Holden, New York Times.

Gabriel Mascaro (Recife, Brazil, 1983) is a filmmaker and visual artist. His first feature film, August WInds, premiered in Locarno in 2014 and was awarded a Special Jury Mention. His previous documentaries and video installations have been screened at international events including Rotterdam (IFFR), Amsterdam (IDFA), the Guggenheim, MoMA Documentary Fortnight, and the São Paulo Biennale. Neon Bull, his second feature film, won the Horizons Award – Special Jury Prize at the Venice Film Festival.