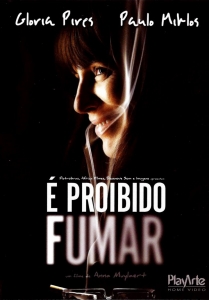 Baby, a chain-smoking guitar teacher in her forties, craves a romantic relationship. She has been living a humdrum existence in São Paulo in the apartment she inherited from her mother. Between arguing with her sisters and ear-jarring music lessons, her life is going nowhere fast. When Max, a good-looking and friendly guitar-player, moves into the apartment next door, Baby sees the possibility of turning her lonely life around. But his free-spirited philosophy of love is going to shake her up in ways she never expected. Anna Muylaert’s second film is a rollicking dark comedy with a clever and refreshingly shrewd perspective on the absurd extremes we may go to, just to have someone to sit next to on the sofa.

Winner of 31 film awards including the Cinema Brazil Grand Prize for Best Picture and Best Director.

Anna Muylaert (b. in São Paulo, Brazil, 1964) has directed six short films, the most notable being The Origin of Babies (1995). Her first feature film, Durval Records (2002), won seven awards at the Gramado Film Festival, including Best Director and Best Film. Her second feature, Smoke Gets in Your Eyes (2009), won eight awards at the Brasília Festival, including Best Screenplay and Best Film. Her third film, The Second Mother (2015), won the Panorama Audience Award at Berlin, and in 2016, her latest film, Don’t Call Me Son, premiered at Berlin and won the Teddy Award Jury Prize.